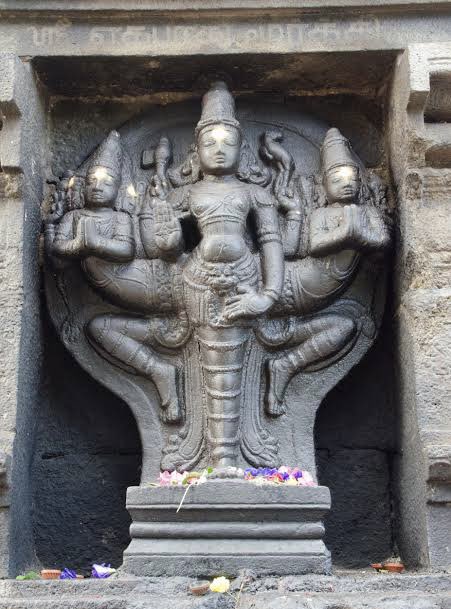 Ekpaad Shiva, Shiva with one foot is a very rare depiction of Shiva. Here Vishnu and Brahma are emerging out of him. The leg denotes that Shiva is the ultimate god on which everything is built.

Ekapada refers to a one-footed aspect of the Hindu god Shiva. This aspect is primarily found in South India and Orissa, but also occasionally in Rajasthan and Nepal. The Ekapada is primarily represented in three iconographical forms. In the Ekapada-murti (“one-footed icon”) form, he is depicted as one-legged and four-armed. In the Ekapada-Trimurti (“one-footed Trinity”) form, he is depicted with the torsos of the deities Vishnu and Brahma, which together with Shiva form the Hindu Trinity (Trimurti) emanating from his sides, waist upwards and with one leg; however, sometimes, besides the central one leg of Shiva, two smaller legs of Vishnu and Brahma emerge from the sides. While some scriptures also call the latter configuration Ekapada-Trimurti, some refer it to as Tripada-Trimurti (“three-footed Trinity”). In Orissa, where Ekapada is considered an aspect of Bhairava—the fearsome aspect of Shiva—the iconography of Ekapada-murti becomes more fierce, with motifs of blood sacrifice. This aspect is called Ekapada Bhairava (“one-footed Bhairava” or “the one-footed fierce one”).