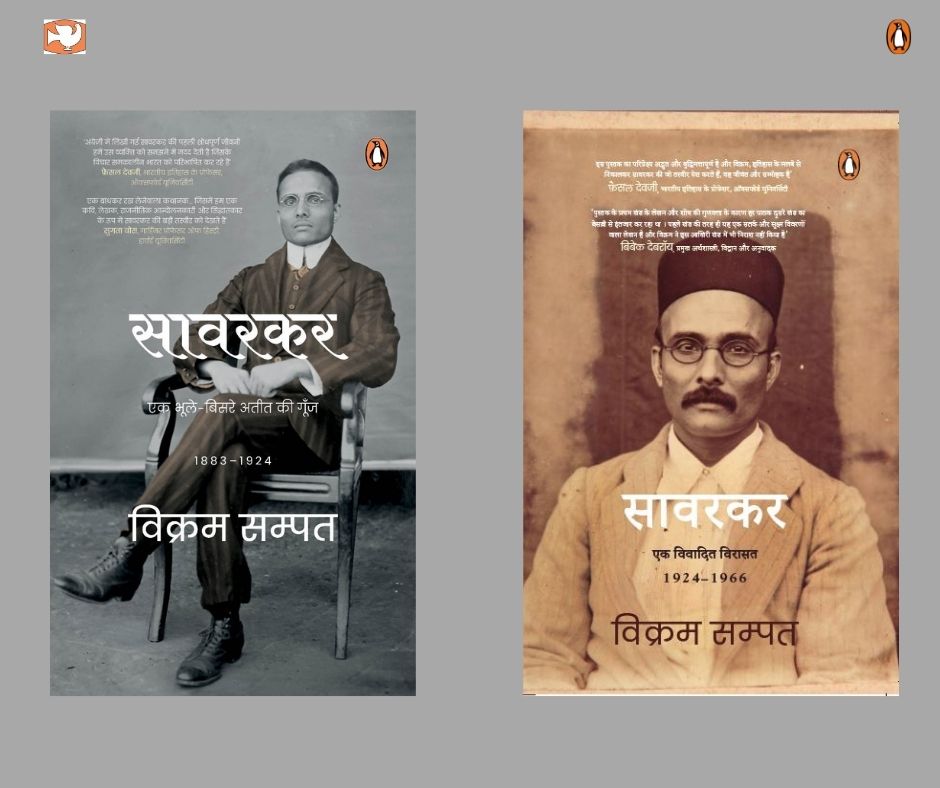 Vikram Sampath is a Hindu scholar of a different kind. The kind who keeps his head low and just produces books. Fantastic books. He produced a two volume biography of Veer Sawarkar, rationalist, atheist and a prominent hindu revolutionary who fought against the British. Not to mention Vikram Sampath is a member of prestigious Royal Historical Society.

Sawarkar is a touchy topic for most of the hindu baiters. Sawarkar was nothing like Gandhi or Nehru whom the west has normalized as “good hindus”.VDS was revolutionary who constantly plotted violence against the British occupiers in India. You see, advocating and actually killing British people in India was a good strategy for Indians but the worst possible thing for the British colonizers. So once they got their hands on him he was swiftly sent to Andaman jail. One of the worst sort of jails in entire human history which might put the American Guatmala Bay jails to shame.

Now, the story would end there if VDS was an ordinary man. He was not. He was a polymath and a genius. He was a prolific writer and an exceptional poet. Since I have read his collected works I know that if he had just written poetry and done nothing else in life he would easily feature in the top 5 poets of last century in India.

VDS’s work was popular and inspiration for many many revolutionaries and radicals throughout India including that of Nathuram Godse. The infamous Hindu radical who shot Gandhi dead.

VDS did not waste his time in the Andaman jail. He produced poetry and constantly figured ways out of the jail. He even convinced British that he was a changed man, he felt sorry for his misdeeds and would amend his ways if the British would grant him amnesty. VDS was already causing enough problems for the British in the jail as well so at some point they decided to send him back to the mainland where of course he continued his battle against the British in many different ways. This time however he was much smarter to not get caught.

This is the sort of Hindu that British and other enemies of Hindus feared the most. Hence there have been massive attempts to paint VDS as some kind of weasel who committed the crime of lying to the British government to get out of the jail.

Vikram Sampath’s work shed much deeper light on this man’s character. VS goes so deep into Sawarkar’s life and brings the aspects of his life that people outside of Maharashtra and marathi speakers may not understand.

Audrey Truschekey is an Islamist apologists who often masquerades as Hindusim expert in wester academia. But in reality she is simply an  Marxist Islamist (though she is probably born Jewish). In past whenever scholars and even ordinary individuals showed the glaring faults in her scholarship she responded with abuse and name calling on such people. At one point out of frustration she called Hindu god Rama a “pig”.

Refusal to engage in scholarly debate and work and rather relying deeper pockets to cancel the people who challenge their dominance of narratives has become a hallmark of marxist islamist scholars throughout US and Europe.

Unable to find any actual problems with Sampath’s work she made laughably bad claims that Sampath in fact was plagiarizing in his writings on Sawarkar. This was even more remarkable because she does not hold Savarkar in much respect either. Of course for every white savior there should be some brown folks carrying water.  Audrey was joined by Ananya Chakrabarty and Rohit Chopra, again both marxist pseudo scholars.

Instead of actually proving any plagiarism these people published a letter asking the Royal society to cancel Mr. Sampath’s membership.

One might think that Audrey and her gang found Mr. Sampath’s scholarly writing somewhere in his major work such as his two volume biography of VDS. Not at all. The gang probably decided that they will cancel Mr Sampath by hook or crook and sifted through all his work. They found a journal published by India Foundation (which I think is run by BJP/RSS member Ram Madhav) where he had contributed an essay in English about Sawarkar.

But then whom was he plagiarizing ? Audrey Truschkey herself ? or other members of her gang ? No. But another famous name in the scholarship related to Sawarkar. Prof Janaki Bakhle. Prof. Bakhle probably was not even aware about the existence of Audrey and her gang but that did not stop Audrey from being the white saviour for the brown Prof Bakhle.

How things blew up in Audrey’s face.

It turns out that Prof. Bakhle herself had read Sampath’s writings and had reviewed them extensively but never made any accusation of plagiarism of any kind.

Sampath approached Indian courts to seek an injunction against the nefarious activities of the Truschkey gang. The court looked at the evidence and felt that there was indeed prima facie evidence that Sampath is right. Court asked Twitter to take down the libel tweets by Audrey.

Hindu phobic scholars like Truschkey will continue attack hindu scholars. We must fight back with all means possible but more importantly show to the world that these people are in fact phony and shoddy scholars.