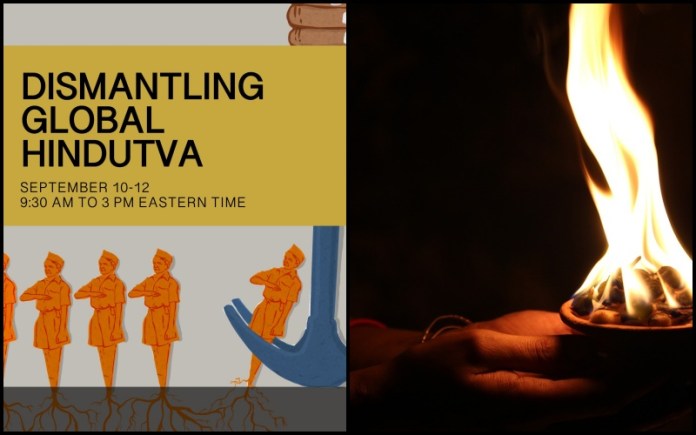 At Sadhana108 we support free speech. I think people all around the world should have absolute free speech which include criticizing religion, people and what some even may call “hate speech”. Having said that, we also believe that people who engage in any kind of speech should also be responsible for the consequences of this speech. Other people may like you or not like you based on what you say.

Some far left individuals and Islamists have turned their focus on Hindus in USA. They have correctly identified the fact that Hindus in India as well as outside India remain “unconquered” by their ideologies. Despite their best efforts Hindus have not fully co-opted into the far left ideology that is so prevalent in US academia.

Far left is losing rapidly in India. India over last 30 years have become more market friendly, more capitalist, less dependent on foreign aide and much free than it ever was in past. With economic prosperity comes disdain for petty politics and government run programs. This has made it hard of erstwhile communists to survive in India living on government dole.

Hindus such as Rajiv Malhotra and gurus such as Sri Sri, Jaggi Vausdev, Ramdev baba etc. are no more fringe folks being hunted by left wing government stooges but rather are very popular world over and helping Hindu resurgence. Hindus are building institutions with long lasting impact and documenting the damage that Islamic and British colonialism did to Hindus.

If this trend continues communists and Islamists stand to lose big time.

One of the reason why all this was possible was because of a steady outflow of Indians into western liberal world, which exposed Hindus to Individual liberty and material prosperity. With prosperity comes independent thinking and once you are free from government propaganda you can think for your own.

Indian and Hindu diaspora thus has made immense difference to Indians back home. Without the support of Hindu diaspora issues such as temple control of government, denying Hindus right to setup their own educational institutes etc. would not have been major issues back home.

To counter this the left in USA has co-opted some Islamists and have decided to create a propaganda around “caste” and “Hindutva” but as one looks at their agenda and speakers it is obvious that this is more about “destroying Hindus” than anything else. Not only the entire conference is full of shoddy scholars and politicians and violent extremists posing as “scholars” but they are also engaging baseless allegations and nonsensical conflation of issues.

Hindu supremacists have made a concerted effort over several decades to equate their manufactured term “Hindutva” with Hinduism. From the early twentieth century onwards, they have worked hard to shield themselves from legitimate critique for their extremism by claiming to speak for a persecuted Hindu community, despite Hindus being a sizable majority in India. Most recently, they have been leveraging the language of being a religious minority in the United States to evade criticism of their supremacist ideologies. [link]

Until 1947 India was a British colony literally suffering from “white supremacy”. Independence came with massive riots and partition of India which happened because Islamist supremacists literally wanted a separate land. This was a violent demand from Islamists. Claiming that there were “Hindu supremacists” in early 20th century is plain idiotic.

Idea of Hindutva is well articulated by folks like Veer Sawarkar and in modern days Indian supreme court. Neither of them have defined it any sense as “supremacist” ideology. A supremacist ideology is pretty much like communism or Islam which literally insists themselves being “one true” or “one perfect” ideology. Hindutva on other hand is defined as a cultural identity of Hindus of all folds.

Most recently, they have been leveraging the language of being a religious minority in the United States to evade criticism of their supremacist ideologies.

It is pretty idiotic to claim that a super minority in USA would be “supremacist” and it is even more idiotic for any group in USA to claim that they “evade criticism”. In reality, most American universities and left wing scholars are openly anti-Hindu not just in their writing but also in publishing their books.

US being one of the few countries with absolute free speech, it is not possible for anyone to “evade criticism”. Unlike India USA does not offer any “special minority” treatment to Hindus. Hindus are pretty much held to the same standards and laws as Blacks, Jews or Muslims.

In the Indian subcontinent, Hindusim has also been shaped by syncretic faiths such as Sufism, which is a form of mysticism that broke away from orthodox Islam, and by poets and visionaries who adopted it into local idioms.

Claiming that Hinduism is shaped by “sufism” or any other Islamic influence is like claiming solar panels in Nevada are responsible for Sun’s brightness. Not only this is completely false and fraudulent claim, if at all it is reverse that the violent ideology of Islam might have got mellowed in India after getting influenced by Hinduism.

The joke of “fact sheet“.

For any group that is posing as academia, at least some pretense of scholarship is expected. However the so called RSS factsheet is nothing but one left wing university quoting even more far left individuals and media which make easily demonstrably false claims.

Pointing out all the shoddy scholarship in this “fact sheet” is basically like being a mosquito in a nudist colony. You do not know where to begin.

Today’s RSS tries to distance itself from its past. But according to Arundhati Roy, “its underlying ideology, in which Muslims are cast as treacherous permanent ‘outsiders,’ is a constant refrain in the public speeches of BJP politicians, and finds utterance in chilling slogans raised by rampaging mobs. For example: ‘Mussalman ka ek hi sthan—Kabristan ya Pakistan’ (Only one place for the Muslim—the graveyard, or Pakistan). In October this year, Mohan Bhagwat, the supreme leader of the RSS, said, ‘India is a Hindu Rashtra’—a Hindu nation. ‘This is non-negotiable.’”

Note the article quotes Arundhati Roy, a sympathizer of violent communist terrorists in India who called them “Gandhian with Guns”. Not sure why Arundhati Roy should be taken seriously on this matter let a lone be as a credible reference as she happens to be a fiction writer. Politicians are known to raise a lot of slogans all the time. Barely they are the standard of their ideology.

Not to mention Mohan Bhagwat also clarified that by Hindus he means people of this land which includes Muslims and others all those who share common DNA.

How to counter the Hinduphobia and academia

As united Hindu community we must double down on Hindutva and completely embrace the term and use it as a complete synonym with Hinduism. Which includes our faith, worship, unity and indeed politics.

Remember that for the far left Hinduism = Sufi Islam. This is basically a big attempt to make Hindus a bunch of communist Dhimmis who allow these “supremacists” to define what Hinduism is and “learn their place”.

Allowing these far left individuals to define your faith is a cultural suicide.