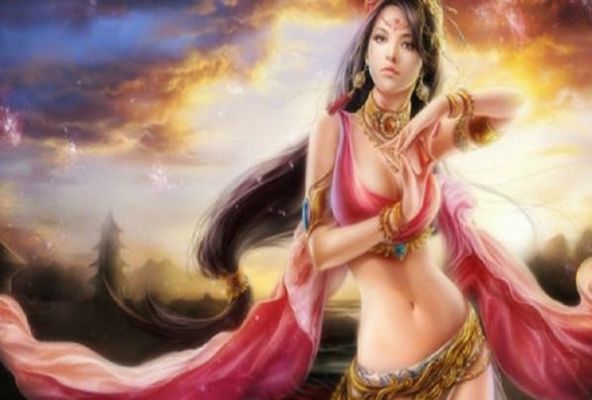 Shalini Mahapatra of Indic Today has written this amazing article about Apsara Pramlocha’s romance with Rishi Kandu that lasted 907 years.

Rishi Kandu, performed his ascetic Tapasya- penance, on the banks of river Gomati. Rishi Kandu was well versed with the Vedas and was dedicated to doing tough Tapasya in order to attain desired goals. His penance was extremely challenging. In summers Kandu Rishi meditated in the scorching sun and during the monsoons, he sat under the open sky and meditated undisturbed soaked in the wet clothes.

During the winter season, he meditated in the chill of the outdoors. Seeing his intense Tapasya Devendra grew very apprehensive and decided to take charge of disrupting his stringent penance. Dev Raj Indra engaged the most beautiful Apsara Pramlocha at the task of destroying Rishi Kandu’s tapa.

Apsara Pramlocha descended on the Earth near Rishi Kandu’s hermitage on the banks of river Gomati. Rishi Kandu visited the river every day to offer his morning prayers. Kandu’s eyes fell on the enchanting Apsara.

The stringent Rishi Kandu was distracted at the spur of her sight. He succumbed to romantic aspirations for the most gorgeous Apsara Pramlocha. He invited her to be his companion and lived with her in conjugal bliss on the Mandarachala mountains.

Apsara is an interesting concept in Hindu mythology. Apsaras are absolutely beautiful and always young women from Indra’s court. They occasionally are sent to earth by Indra. Their primary duty often but if not always is to serve interests of Indra on earth. Sometimes it be by providing company to Indra’s friends (like in Vikramovarshiya) or sometimes by actually tempting soem Rishi.

Their beautiful bodies enable them to arouse even the greatest of ascetics. This often results into a real sexual intercourse with the subject and even children. Menaka, Rambha and Urvashi are often talked about Apsaras but there are even more.

The meaning of Apsara.

Ap means water and sara means the one who dwells in water. It means they are youthful and fluid. Often women bath naked in water and it is symbol of lust. Apsara stands just for that. They are blessed with eternal youth and eternal beauty just like water. They move from one master to another and yet remain as pure as if it is their first time.

Pramlocha’s story is even more interesting because she seems to have put Rishi Kandu in a time loop where he completely forgets time in her company over 900 years pass he still thinks he met her in the morning. When he eventually made away from the truth he is angry but does not curse here.

Apasaras are a metaphor for temporary pleasures in life which not matter how tempting destroy our long term goals.