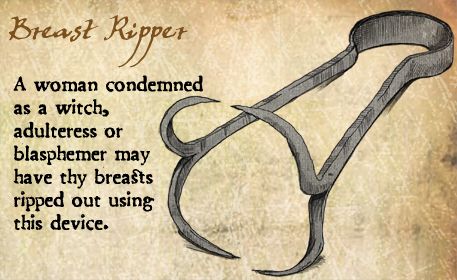 Francis Xavier was a pirate in priests clothing. Or may be Christian priests are supposed to be like pirates. Francis Xavier’s hatred for Hindu Pagans had no limits. The inquisition that he brought upon Goa let to mass murders and tortured of Hindu man, women and children. He was an inspiration to all those Christian zealots who cut off hands and heads of Hindus who refused to convert and ripped off breasts from women who refused to sway from the path of Dharma. Such is the history of catholic church mafia and Christianity. Do you know During Goa Inquisition these devices were used to rip women’s breast and today Hindus go to same St Francis Xavier church for sight seeing and some confused HINDU go and “pray” pic.twitter.com/AdY5FOZOHC

The Palace of the Inquisition was pointed out in awe by Goans, who called it Orlem Goro. or Big House, with two hundred cells. The Inquisition in Goa, on account of its rigors, was reputed to be the worst of the existing inquisitions in the  catholic orb of the five parts of the world, as felt unanimously by national and foreign writers.

‘……The inquisition, this tribunal of fire, thrown on the surface of the globe for the scourge of humanity, this horrible institution, which will eternally cover with shame its authors, fixed its brutal domicile in the fertile plains of the Hindustan. On seeing the monster everyone fled and disappeared, Moguls, Arabs, Persians, Armenians, and Jews. The Indians even, more tolerant and pacific, were astounded to see the God of Christianism more cruel than that of Mohammed, deserted the territory of the Portuguese  and went to the lands of the Muslims, with whom time had made peaceful living possible, in spite of the fact that they (Indians) had received from them enormous and incalculable evils. In this fashion the fields and cities became deserted as are today Diu and Goa.. ‘    (2)

Alexandre Herculano, a famous writer of the 19th century, mentioned in his ‘Fragment about the Inquisition’:   ‘…The terrors inflicted on pregnant women made them abort….Neither the beauty or decorousness of the flower of youth, nor the old age, so worthy of compassion in a woman, exempted the weaker sex from the brutal ferocity of the supposed defenders of the religion….’

‘…There were days when seven or eight were submitted to torture. These scenes were reserved for the inquisitors after dinner. It was  a post-prandial entertainment. Many a time during those acts, the inquisitors compared notes in the appreciation of the beauty of the human form. While the unlucky damsel twisted in the intolerable pains of torture, or fainted in the intensity of the agony, one inquisitor applauded the angelic touches of her face, another the brightness of her eyes, another, the volluptuous contours of her breast, another the shape of her hands. In this conjuncture, men of blood transformed themselves into real artists !!’

Unfortunately Christians in Goa still remain ignorant of this and honor this pirate as “Lord of Goa”. Fortunately people including Sadhaka has been busy increasing awareness on the topic.

Is the term “South Asian” rooted in racism and/or colonialism?