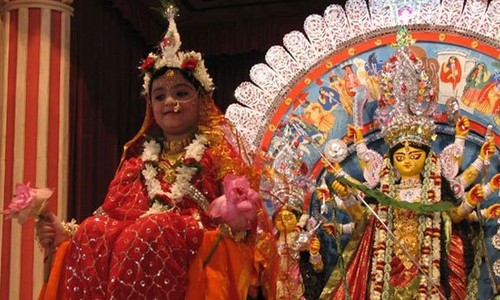 Thousands of people have gathered in the headquarter of Ramakrishna Mutt and Ramakrishna Mission the Bellur Mutt to witness worship of a pre-pubertine girl as the goddess as Durga.

Swami Vivekananada started Kumari Pooja in 1901 to highlight the importance of women in Indian society.

At dawn, after a ritual bath in the holy waters of the Ganga, the ‘Kumari’ — a pre-pubertine girl — was wrapped in a red sari and adorned with flowers and jewellery, with a ‘sindur (vermillion) tilak’ on her forehead. The Kumari fasts until the worship is over. She sits before Goddess Durga’s idol on a decorated chair with priests chanting hymns and dhak (traditional drum) playing in the background. After the puja, the divinity of the goddess descends into the Kumari, said a priest.

Hinduism believes in the universal creative forces to be feminine gender. The very original force is Mahamaya whose inspiration created the gods and the rest of the cosmos. The inspiration is the life force of the entire creation. All the major and minor energies and forces are represented by various goddesses. Navaratra deity Durga and all her dimensions are believed to be the manifestations of the same basic inspiration Mahamaya. Religiously speaking, Devi is essentially a worship of the great feminine. In a kanya the great feminine potential is at its peak. having developed into a girl of a certain age and before attaining puberty, a female child is considered the most auspicious, most jagrat, and the most clear minded and clear souled individual.

While invoking the parashakti in such a form the purity of mind body and spirits is required and is fulfilled by a girl child of the said age of 8+ before reaching puberty. Such a female child is indeed Devi, who in her later life takes the roles of Parvati as a wife and mother, Lakshmi as a housewife, Saraswati as the first guru of her children, Durga as the destroyer of all obstacles for her family, Annapurna as the food provider through her cooking, Kali as the punisher to bring the members of the family on the right track, etc.