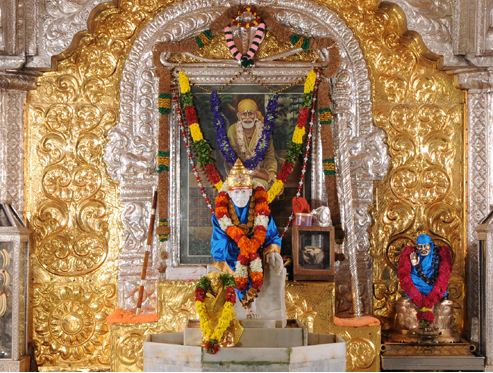 Sri Naga Sai Mandir is a Hindu temple dedicated to the Indian Spiritual Master Shirdi Sai Baba in Coimbatore in the Indian state of Tamil Nadu.

Sri Naga Sai Mandir was established in 1942. The Institution named for Sri Sai Baba was put up darsana of the Devotees. Swamiji entrusted the center to the care of Sri. A.V. K. Chain. In 1942, the late Sn. C.Varadaraja Ayyah donated around one acre of land on Mettupalayam Road, and Thatched Shed was evicted from the donated land meant to house the Sri Sai Baba Mission- later named Sri Sai Baba Madam. The place was opened for worship to everyone regardless of class, creed, caste or religion. The Sai Baba Madam was the meeting ground of Sai Devotees in and around Coimbatore. Sai Bhajans were held regularly on Sundays and Thursdays.

The temple is called Naga Sai Mandir after a story told by Shirdi Sai Baba’s followers of a snake, Nãga, that rose from the flowers in the garden to listen to Shirdi Sai when he was giving darshan to devotees before disappearing.