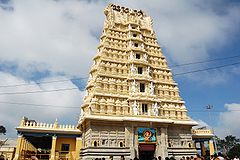 The Chamundeshwari Temple is a Hindu temple located on the top of Chamundi Hills about 13 km from the palace city of Mysore in the state of Karnataka in India. The temple was named after Chamundeshwari or Durga, the fierce form of Shakti, a tutelary deity held in reverence for centuries by Mysore Maharajas.

The original shrine is thought to have been built in the 12th century by Hoysala rulers while its tower was probably built by the Vijayanagar rulers of the 17th century. In 1659, a flight of one thousand steps was built leading up to the 3000 foot summit of the hill. At the temple are several images of Nandi (the bull mount of Shiva). There is a huge granite Nandi on the 800th step on the hill in front of a small Shiva temple a short distance away. This Nandi is over 15 feet high, and 24 feet long and around its neck are exquisite bells.

The temple is of a quadrangular structure. Built in Dravidian style, it consists of the Main Doorway, Entrance, Navaranga Hall, Antharala Mantapa, Sanctum Sanctorum, and Prakara. There is a beautiful seven-tier Gopura or pyramidal tower at the entrance and a ‘Vimana’ (small tower) atop the sanctum sanctorum. Atop the ‘Shikara’, the tower at the entrance, are seven golden ‘Kalashas’.

Krishnaraja Wodeyar III repaired the shrine in 1827 A.D and built the present beautiful tower at the entrance (Gopura). Blessed by the Goddess, Krishnaraja Wodeyar, an ardent devotee of the mother Goddess, presented to the temple a ‘Simha-vahana’ (A lion-shaped vehicle) and other animal cars and jewels of value. The cars are used even now for processions on special religious occasions.

The tower at the entrance has a small image of Lord Ganesha on the doorway. The doorway is silver-plated and has the images of the Goddess in different forms. On either side of the doorway are the images of ‘Dwarapalakas’ or door-keepers. As one enters inside, on the right hand side is a small statue of Lord Ganesha, the remover of all obstacles. After a few steps, there is a flagstaff, the footprints of the Goddess and a small statue of Nandi, facing the sanctum sanctorum. On the right side, before approaching the flag staff, there is an image of ‘Anjaneya’ attached to the wall. On either side of this entrance are two Dikpalakas, Nandini and Kamalini.