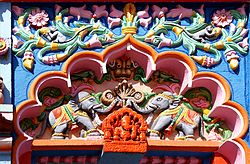 The Vighneshwara Temple or Vighnahar Ganapati Temple of Ozar (also spelt as Ojhar or Ojzar) is a Hindu temple dedicated to Ganesha, the elephant-headed god of wisdom. The temple is one of the Ashtavinayaka, the eight revered shrines of Ganeshain Maharashtra, India. The Ganesha form worshipped here is called Vigneshwara (spelt also as Vigneshvar(a), Vigneshwar : “Lord of obstacles”) or Vignahar (spelt also as Vignahara, “Remover of obstacles”) and is associated with the legend of Ganesha defeating Vignasura, the demon of obstacles.

Ozar is located about 85 km from Pune, off the Pune-Nashik highway and about 9 km north to Narayangaon.[3] Along another Ashtavinayak temple of Lenyadri, Ozar is located in the Junnar taluka of Pune district. Ozar is situated on the banks of Kukadi River close to the Yedagaon dam built on it.

Chimaji Appa, brother and military commander of the Peshwa Baji Rao I, renovated the Vighneshwara Temple and covered the shikhara (temple spire) with gold after seizing the Vasai Fort from the Portuguese. The temple was also renovated in 1967 by the Ganesha devotee Appa Shastri Joshi.

Though Ozar is prescribed to the seventh temple to be visited in the Ashtavinayak circuit, pilgrims often visit Ozar fifth, as it is a more convenient route.

King Abhinandana performed a sacrifice in which he did not give any offering to the god-king Indra. The infuriated Indra ordered Kala (Time/Death) to destroy the sacrifice. Kala takes the form of the demon Vignasura (obstacle-demon) or Vigna (obstacle), who created obstacles in the sacrifice and ruined it. Further, he created havoc in the universe, creating obstacles in the good deeds and sacrifices of sages and other beings. The sages asked god Brahma or Shiva for help, who advised the worship of Ganesha. Hearing the prayer of the ascetics, Ganesha began to battle the demon, who soon realized that it was impossible to win and surrendered to his opponent and agreed not to harass the beings of the world. It was arranged that Vigna (obstacles) would be dwell only in places where Ganesha was not invoked or worshipped. In some versions, the remorseful Vigna was made an attendant of Ganesha, who would trouble those who fail to worship his Lord. Vignasura also requested Ganesha to take the name Vigneshwara (The Lord of Vigna/obstacles) to commemorate the event. The relieved sages consecrated an image of Ganesha at Vighneshwara Temple to mark the event.