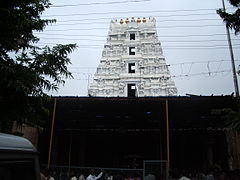 Sri Bramarambha Mallikarjuna Temple is a Hindu temple dedicated to the deities Shiva and Parvati, located at Srisailam in Indian state of Andhra Pradesh. It is significant to the Hindu sects of both Saivism and Shaktism as this temple is referred to as one of the twelve Jyothirlingas of Lord Shiva and as one of the eighhteen Shakti Peethas of goddess Parvati. Shiva is worshiped as Mallikarjuna, and is represented by the lingam. His consort Parvati is depicted as Bhramaramba.It is the only temple in India which is revered as both Jyotirlinga and Shaktipeeth.

When Shiva and Parvati decided to find suitable brides for their sons, Ganesha and Kartikeya argued as to who is to get wedded first. Shiva bade that the one who goes round the world in Pradakshinam could get married first. By the time Kartikeya could go round the world on his vahana, Ganesha went round his parents 7 times (for according to Shastras, going in pradakshinam round one’s parents is equivalent to going once round the world (Bhupradakshinam). Siva got Buddhi(intellect), Siddhi (spiritual power), and Riddhi (prosperity) married to Ganesha. kartikeya on his return was enraged and went away to stay alone on Mount Kraunja in the name of Kumarabrahmachari. On seeing his father coming over to pacify him, he tried to move to another place, but on the request of the Devas, stayed close by. The place where Siva and Parvati stayed came to be known as Shrishailam.

As per Hindu legend, the presiding deity in the form of Linga (an iconic form of Shiva) was worshipped with jasmine (locally called Mallika), leading to the name of presiding deity as Mallikarjuna. Mahashivratri is the main festival celebrated at Srisailam Mallikarjuna Temple. There are inscriptional evidences from the Satvahana Dyanasty which place the temple to be existent from the 2nd century. Most modern additions were done during the time of king Harihara of Vijayanagara Empire