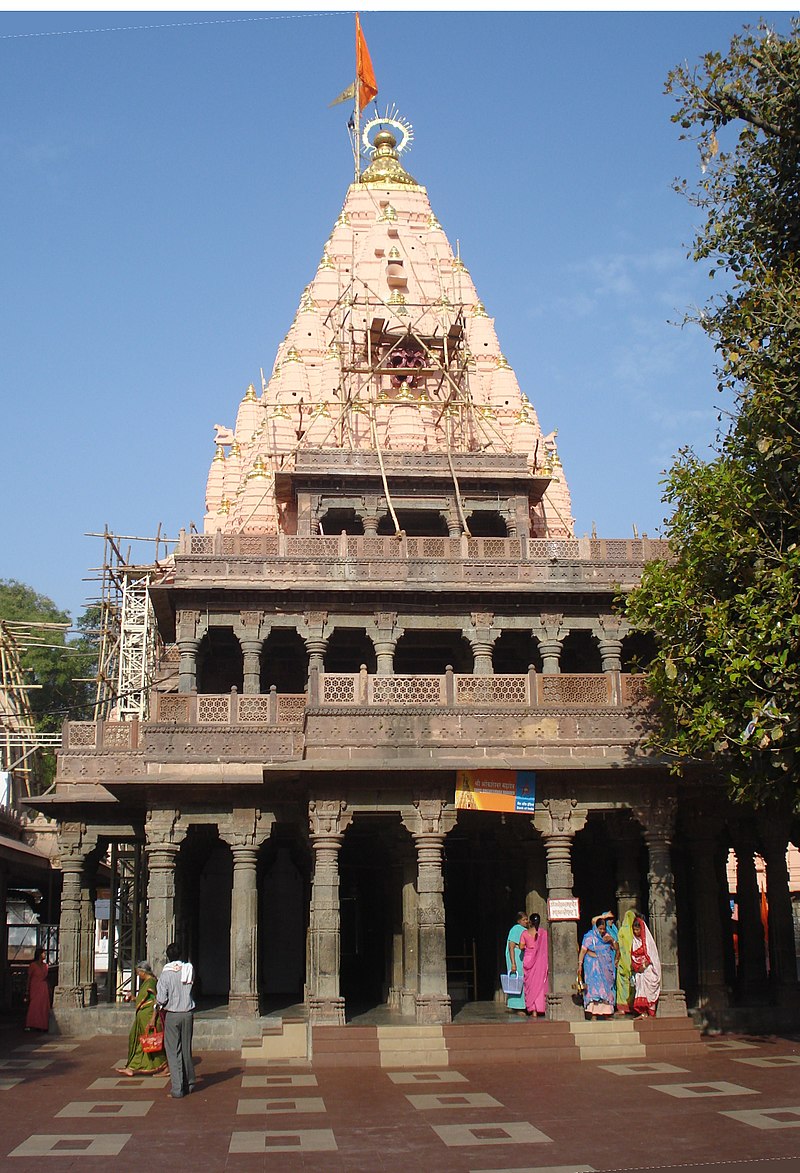 Mahakaleshwar Temple  is one of the most famous Hindu temples dedicated to Lord Shiva and is one of the twelve Jyotirlingams, which are supposed to be the most sacred abodes of Lord Shiva. It is located in the ancient city of Ujjain in the state of Madhya Pradesh, India. The temple is situated on the side of the Rudra Sagar lake. The presiding deity, Lord Shiva in the lingam form is believed to be Swayambhu, deriving currents of power (Shakti) from within itself as against the other images and lingams that are ritually established and invested with mantra-shakti.
The idol of Mahakaleshwar Temple is known to be dakshinamurti, which means that it is facing the south. This is a unique feature, upheld by the tantric shivnetra tradition to be found only in Mahakaleshwar among the 12 Jyotirlingas. The idol of Omkareshwar Mahadev is consecrated in the sanctum above the Mahakal shrine. The images of Ganesh, Parvati and Karttikeya are installed in the west, north and east of the sanctum sanctorum. To the south is the image of Nandi, the vehicle of Lord Shiva. The idol of Nagchandreshwar on the third storey is open for darshan only on the day of Nag Panchami. The Mahakaleshwar Temple has five levels, one of which is underground. The temple itself is located in a spacious courtyard surrounded by massive walls near a lake. The shikhar or the spire is adorned with sculptural finery. Brass lamps light the way to the underground sanctum. It is believed that prasada (holy offering) offered here to the deity can be re-offered unlike all other shrines.

The presiding deity of time, Shiva, in all his splendor, reigns eternally in the city of Ujjain. The Mahakaleshwar Temple, its shikhar soaring into the sky, an imposing façade against the skyline, evokes primordial awe and reverence with its majesty. The Mahakal dominates the life of the city and its people, even in the midst of the busy routine of modern preoccupations, and provides an unbreakable link with ancient Hindu traditions.

On the day of Maha Shivaratri, a huge fair is held near the temple, and worship goes on through the night.In the precincts of the Mahakaleshwar temple is Shri Swapaneshwar Mahadev temple, where devotees pray to Shiva as Mahakaal, to realize the most important dreams of their lives. Sadashiv Mahadev is so empathetic, benevolent and easy to please that devotees are sure to be granted the boons they wish for with a pure heart in this temple, it is believed. Here Mahadev is Swapaneshwar and Shakti is Swapaneshwari.

The temple is open from 4 am to 11 pm. The temple is also glorified in 7th century.C.E, Tamil tevaram hymns of tirugnanasambandar, sundarar, tirunavukkarasar, and they refer to the same as tiru oonjai maakalam, oonjai being Tamil name of word ujjain.