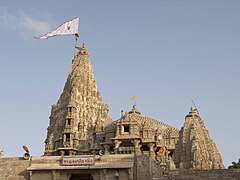 The Dwarkadhish temple, also known as the Jagat Mandir and occasionally spelled Dwarakadheesh is a Hindu temple dedicated to the god Krishna, who is worshiped here by the name Dwarkadhish, or ‘King of Dwarka’. The temple is located at Dwarka, Gujarat, India. The main shrine of the 5-storied building, supported by 72 pillars, is known as Jagat Mandir or Nija Mandir, archaeological findings suggest it to be 2,200 – 2,000 years old.Temple was enlarged in the 15th- 16th century. The Dwarkadhish Temple is a Pushtimarg temple, hence it follows the guidelines and rituals created by Vallabhacharya and Vitheleshnath.

According to tradition, the original temple was believed to have been built by Krishna’s grandson, Vajranabha, over the hari-griha (Lord Krishna’s residential place). The temple became part of the Char Dham pilgrimage considered sacred by Hindus in India, after Adi Shankaracharya, the 8th century Hindu theologian and philosopher, visited the shrine. The other three being comprising Shringeri, Badrikashram and Puri. Even today a memorial within the temple is dedicated to his visit. Dwarakadheesh is the 108th Divya Desam of Vishnu on the subcontinent, glorified in the Divya Prabandha sacred texts.

As per Hindu legend, Dwarka was built on a piece of land by Krishna that was reclaimed from the sea. Sage Dhurvasa once visited Krishna and his wife Rukmini. The sage wished that the pair took him to their palace. The pair readily agreed and started walking with the sage to their palace. After some distance, Rukmini got tired and she requested some water from Krishna. Krishna dug a mythical hole that brought in river Ganga to the place. Sage Dhurvasa was furious and cursed Rukmini to remain in the place. The temple where Rukmini’s shrine is found, is believed to the place where she stood.

The town of Dwarka in Gujarat has a history that dates back centuries, and mentioned in the Mahabharat epic as the Dwaraka Kingdom. Situated on the banks of river Gomti, the town is described in legend as the capital of Lord Krishna. Evidence such as a stone block with script, the way the stones were dressed showing that dowels had been used, and an examination of anchors found on the site suggest that the harbour site dates only to historical times, with some of the underwater structure being late Medieval. Coastal erosion was probably the cause of the destruction of what was an ancient port.

The current temple in Chaulukya style is constructed in 15-16th century. The temple covers area of 27 metre by 21 metre with east-west length of 29 metre and north-south width of 23 metres. The tallest peak of the temple is 51.8 m high