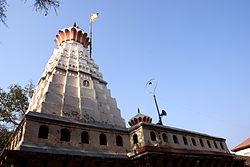 The Chintamani Temple of Theur is a Hindu temple dedicated to Ganesha, the elephant-headed god of wisdom. Located 25 km (16 mi) from Pune, the temple is “one of the larger and more famous” of the Ashtavinayaka, the eight revered shrines of Ganesha in the Indian state of Maharashtra.

The temple lore describes how Ganesha retrieved the wish-giving jewel Chintamani for his devotee, the sage Kapila from the greedy king Gana and how he pacifies the uneasy mind of the god Brahma, who meditated on him in Theur. The Chintamani Temple is associated with the Ganapatya saint Morya Gosavi (dated between 13th to 17th century). Though the temple is believed to have existed since antiquity, the current structure of the temple was built by him or his descendant. The Chintamani Temple was also a spiritual magnet for the Peshwa rulers, especially Madhavrao I (1745–1772) who renovated and made additions to the temple structure.

Theur is located in the Haveli taluka of Pune district, near the confluence of river Bhima and the conjoint river Mula-Mutha. Though Theur is prescribed to the fifth temple to be visited in the Ashtavinayak circuit, pilgrims often visit Theur second in the circuit after Morgaon, as it is a more convenient route