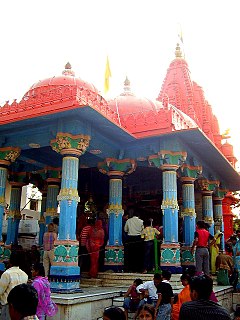 Brahma Temple is a Hindu temple situated at Pushkar in the Indian state of Rajasthan, close to the sacred Pushkar Lake to which its legend has an indelible link. The temple is one of very few existing temples dedicated to the Hindu creator-god Brahma in India and remains the most prominent among them.

Although the present temple structure dates to the 14th century, the Brahma Temple is believed to be 2000 years old. The temple is mainly built of marble and stone stabs. It has a distinct red pinnacle (shikhara) and a hamsa bird motif. The temple sanctum sanctorum holds the central images of Brahma and his second consort Gayatri. The temple is governed by the Sanyasi (ascetic) sect priesthood.On Kartik Poornima, a festival dedicated to Brahma is held when large number of pilgrims visit the temple, after bathing in the sacred lake.

According to the Hindu scripture Padma Purana, Brahma saw the demon Vajranabha (Vajranash in another version) trying to kill his children and harassing people. He immediately slew the demon with his weapon, the lotus-flower. In this process, the lotus petals fell on the ground at three places, creating three lakes: the Pushkar Lake or Jyeshta Pushkar (greatest or first Pushkar), the Madya Pushkar (middle Pushkar) Lake, and Kanishta Pushkar (lowest or youngest Pushkar) lake. When Brahma came down to the earth, he named the place where the flower (“pushpa”) fell from Brahma’s hand (“kar”) as “Pushkar”.

Brahma then decided to perform a yajna (fire-sacrifice) at the main Pushkar Lake. To perform his yajna peacefully without being attacked by the demons, he created the hills around the Pushkar — Ratnagiri in the south, Nilgiri in the north, Sanchoora in the west and Suryagiri in the east — and positioned gods there to protect the yajna performance. However, while performing the yajna, his wife Savitri (or Sarasvati in some versions) could not be present at the designated time to perform the essential part of the yajna as she was waiting for her companion goddesses Lakshmi, Parvati and Indrani. So Brahma married Gurjar girl, Gayatri and completed the yajna with his new consort sitting beside him, holding the pot of amrita (elixir of life) on her head and giving ahuti (offering to the sacrificial fire).

When Savitri finally arrived at the venue she found Gayatri sitting next to Brahma which was her rightful place. Agitated, she cursed Brahma that he would be never worshipped, but then reduced the curse permitting his worship in Pushkar. Savitri also cursed Indra to be easily defeated in battles, Vishnu to suffer the separation from his wife as a human, the fire-god Agni who was offered the yajna to be all-devouring and the priests officiating the yajna to be poor. Endowed by the powers of yajna, Gayatri diluted Savitri’s curse, blessing Pushkar to be the king of pilgrimages, Indra would always retain his heaven, Vishnu would be born as the human Rama and finally unite with his consort and the priests would become scholars and be venerated. Thus, the Brahma Temple  is regarded the only temple dedicated to him. Savitri, thereafter, moved into the Ratnagiri hill and became a part of it by emerging as a spring known as the Savitri Jharna (stream); a temple in her honour exists her