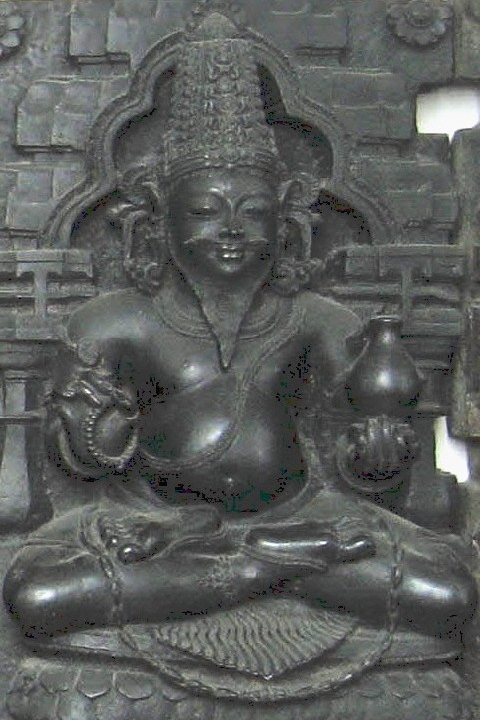 Bṛhaspati  is an Indian name, and refers to different mythical figures depending on the age of the text. In ancient Hindu literature Brihaspati is a Vedic era sage who counsels the gods,while in some medieval texts the word refers to the largest planet Jupiter. He is the god of eloquence in some ancient post-Vedic Indian texts, and sometimes identified with god Agni.

Bṛhaspati appears in the Rigveda (pre-1000 BCE), such as in the dedications to him in the hymn 50 of Book 4; he is described as a sage born from the first great light, the one who drove away darkness, is bright and pure, and carries a special bow whose string is Rta or “cosmic order” (basis of dharma). His knowledge and character is revered, and he is considered Guru (teacher) by all the Devas. In the Vedic literature and other ancient texts, sage Brihaspati is also called by other names such as Brahmanaspati, Purohita, Angirasa (son of Angiras) and Vyasa; he is sometimes identified with god Agni (fire). His wife is Tara (or goddess who personifies the stars in the sky). In the Mahabharata, the son of Brihaspati named Bharadvaja is the counsellor of the Pandavas.

The reverence for sage Brihaspati endured through the medieval period, and one of the many Dharmasastras was named after him. While the manuscripts of Brihaspati Smriti (Bṛhaspatismṛti) have not survived into the modern era, its verses were cited in other Indian texts. Scholars have made an effort to extract these cited verses, thus creating a modern reconstruction of Bṛhaspatismriti. Jolly and Aiyangar have gathered some 2,400 verses of the lost Bṛhaspatismṛti text in this manner.