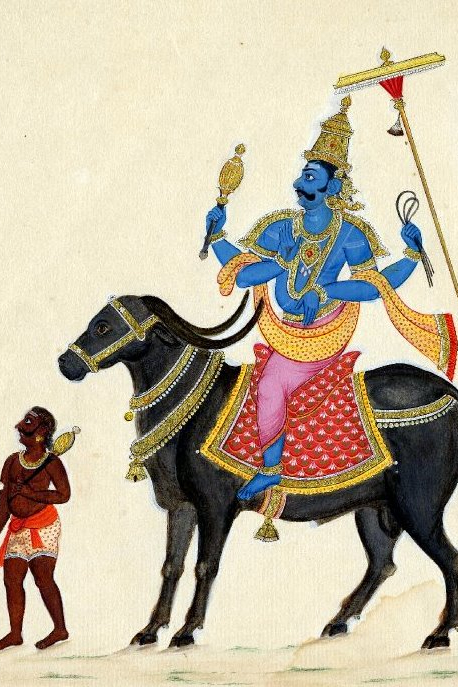 Yama or Yamarāja, also called Imra, is a god of death, the south direction and the underworld, belonging to an early stratum of Rigvedic Hindu deities. In Sanskrit, his name can be interpreted to mean “twin”. In the Zend-Avesta of Zoroastrianism, he is called “Yima”. According to the Vishnu Purana, his parents are the sun-god Surya  and Sandhya, the daughter of Vishvakarma. Yama is the brother of Sraddhadeva Manu and of his older sister Yami, which Horace Hayman Wilson indicates to mean the Yamuna. According to Harivamsa Purana her name is Daya.There is a temple in Srivanchiyam, Tamil Nadu dedicated to Yama.

In the Vedas, he is said to have been the first mortal who died. By virtue of precedence, he became the ruler of the departed, and is called “Lord of the Pitrs”.

Mentioned in the Pāli Canon of Theravada Buddhism, he subsequently entered Buddhist mythology in Tibetan and East Asian Buddhism as a dharmapala under various transliterations. He is otherwise also called as “Dharmaraja”.