RTE – Is a #core issue for Hindu religion 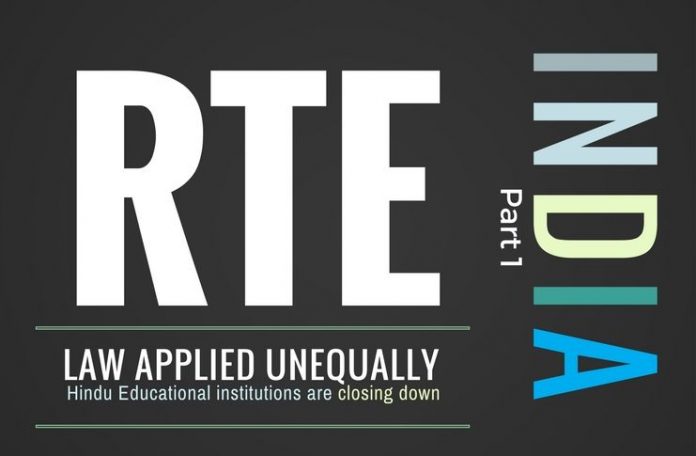 Repealing Right to Education law, 93rd amendment to Indian constitution and temple control in the hands of Hindu people should be the primary goal of all Hindus today. Without these three objectives achieved in next 20 years there is no future for Hindus.

Protecting your culture is not about cows. It is about education.

BJP and RSS might be more obsessed with cows but you should put more importance on your kids. If you can not chose what your kids study in school you can not control the future of your culture. As long as RTE exists the babus will control the Hindu schools while Christians will be free to run their schools as they please. People with more freedom can offer higher quality.

Do you want your kids to learn the following  ? Bihar nationalised all Hindu schools in 1980s. The government babus than ran amok and touched all of them with their magical inverse Midas touch. Some quality schools from Patna now resemble Rajiv Gandhi Mutraalay.

The missionary run schools however remained in missionary hands and continued to provide quality education to those they carefully selected. Missionaries select high quality kids, smart ones, powerful ones and rich ones first. Remember :  entire Thakare family studies in Bombay Scottish School. These kids then grow up to become IAS officers and politicians and help their alma mater.

During the late 1970s and early 1980s, the state government took over management of most privately run schools. This adversely affected school education in the state since the state government was ill equipped to manage the schools through its bureaucrats who were trained for law and order duties. Though the state accorded them government recognition, the standard started to fall. The state did not take over the schools run by the Christian missionaries and these schools provided a fillip(boost) to quality education in Bihar. [Source]

What can you do ?

Understand all the issues through the prism of core agenda.

Remember never to offer support to any politician without first judging their actions on core agenda. Core agenda is not sectarian. It protects rights of all citizens and demands equal treatment from state. There are some key questions every Hindu must ask himself/herself before analysing a government policy/proposal.

A “beef ban” impacts a small % of people who are in beef business. They might be muslims or Hindus but a completely insignificant number of people. The “beef ban” is purely based on emotions and brings nearly zero benefits to Hindu community. That is why it is at a much lower level of importance.

A school on other hand impacts around 20% of our population and only Hindu population. It takes away freedom from Hindus and offers more freedom to Christian schools. Guess who is the winner and loser here ?

Answer above questions with respect to the following laws/schemes: