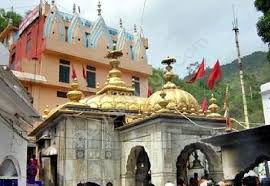 In the lower Himalayan region of Kangra lies the temple of Jwala Devi. It is dedicated to the Goddess Jwala and is supposed to be amongst the most ancient temples of India. However unlike other temples what sets this temple apart is the fact that there is no idol in the premises. The obeisance is paid to a light blue flame which is supposedly coming out from the rocks there. This flame is seen at multiple places in the Jwala ji temple and has never ever stopped burning. So far many scientific types of research have been conducted on these flames. The scientists say that probably there is a volcano below the place where the Jwala Ji temple is located. The natural gas emerging from this volcano is causing the flames. But in the 70’s a natural gas company was sent to investigate any such presence in the rocks there. They did not find anything and came back disappointed.

Mughal emperor Akbar tried his best to get these flames extinguished but failed miserably. He tried to put an iron disk on them but they blasted the same. The disk can still be found in the Jwala ji temple. Akbar then presented Golden parasol to the temple and went back. So far no one has been able to explain the mystery of Jwala Devi flames. It is said that when Sati immolated herself in the Yagya fire of her father Shiva went crazy with grief. He roamed around with her body in his arms. To stop him Vishnu cut Sati’s body into multiple parts which fell all over. At Jwala Devi fell Sati’s tongue and it manifested itself in the form of these flames. It is said that the Jwala Ji temple was first constructed by Raja Bhumi Chandra. He once received a complaint from a cowherd that someone was drinking the milk of all the cows. He stared searching around and came to this famous temple. Pandavas are also supposed to have paid their obeisance here and get some construction work also completed.

Maharaja Ranjit Singh presented the Jwala ji temple with a gilt roof in 1815 AD. After that, his son Maharaja Kharak Singh added a folding door of silver plates to the temple. The Jwala temple is a unique symbol of God’s presence being felt so openly. One visit to the same is necessary to understand the mystery behind it.