Badrinath temple- Get in touch with your inner self. 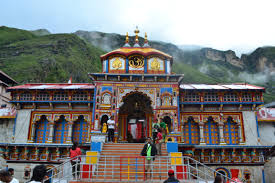 A temple dedicated to Lord Vishnu Badrinath is situated in a district by the same name in Uttarakhand. It is one of the Char dhams that are located in India. Badrinath temple is open only for six months in a year. This is due to the adverse weather conditions in winters in that area.

The temple opens in April and closes in November again for the next 6 months. Located in Garhwal in Chamoli district along the banks of Alaknanda River. The Badrinath temple is one of the most visited pilgrimage sites in India with average visits of nearly 1,060,000. The image that is worshiped in The Badrinath temple is a 3.3 feet tall black stone idol of Lord Vishnu. The idol is only one of the eight self-manifested idols of Lord Vishnu found in India. Even though the temple is located in North India the priest who heads it comes from South India. He is a Nambudiri Brahman originating from Kerala.

Mata Murti Ka Mela is supposedly the most famous festival celebrated in this temple. The Badrinath temple has been provided with three structures i.e. the Garbagriha, Darshan Mandap and the Sabha Mandap. The idol of Badrinath holds a Shankha and Chakra in each of its arms which are lifted above. The rest two arms are kept in the lap in a Yoga Mudra posture.

Just below the temple is the Tapt Kund a group of hot sulfur springs which are supposed to have medicinal qualities. There are two water ponds in the temple known as Narad Kund and Surya Kund. Hindu mytholgy says that Vishnu sat here for his meditation while his Consort Lakshmi protected him in the form of a Badri tree.

The Badrinath temple is mentioned in many old books like Bhagwata Purana, Skanda Purana, and Mahabharata. The temple is closed on Vijaydashmi in October and opened on Vasant Panchami. Furthermore, the day the temple is closed an Akhand Jyoti is lit which is filled with enough ghee to last until the end of the 6 months. The temple is one of the few places where Hindus pay homage to their parted ones. It is believed that a dip in the Alaknanda River cleanses you of all ills and hence most devotees do that to attain Moksha.