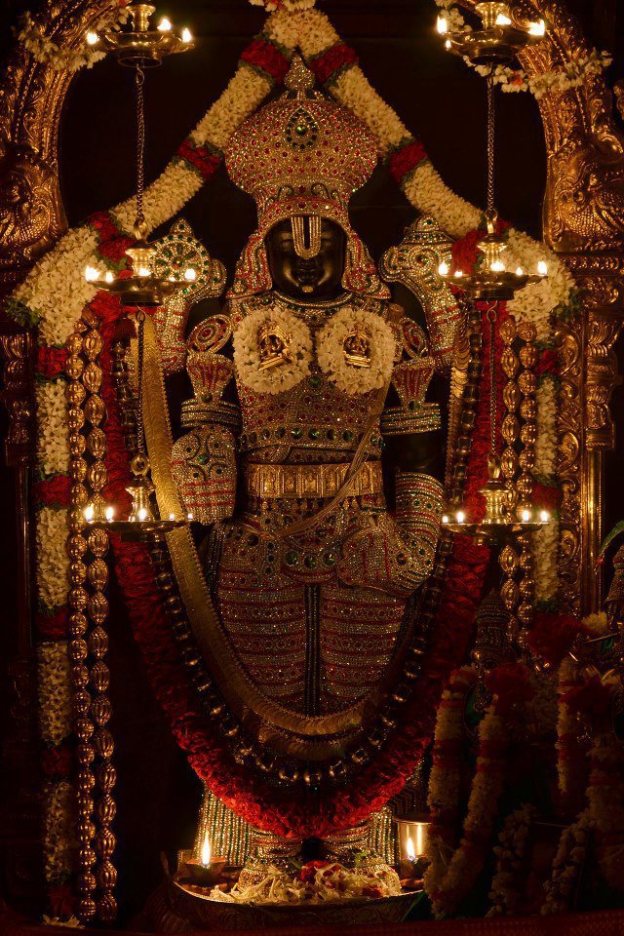 Tirumala Venkateshwar or Tirupati Balaji Temple is located in the hills of Andhra Pradesh. One of the richest and ancient temples has many stories associated with it. Let us have a look at the mystic stories of Shri Tirupati Balaji temple here.

It is said that the hair on the main idol’s head is their real hair. This hair remains soft and silky and never gets tangled. It is said that once a shepherd attacked Balaji. Due to the attack some of his hair got broken and fell down. At that time a Gandharva princess Neela Devi cut her hair and offered them To Tirupati Balaji. Seeing this Balaji blessed Neela Devi by saying that whoever cuts his hair and offers them to him unknowingly will be donating them to Neela Devi. The back portion of the Balaji idol always stays wet. If you listen carefully you can very clearly hear the sound of the sea. The temperature of the Tirupati Balaji idol is always 110 Fahrenheit. This despite the fact that the temple is on a height and it is always very cold there. At 04:30 in the morning the Abhishek is done after which sweat forms on the Idol. Later these drops are cleaned by a cloth. On Thursdays when his clothes are taken down for a change they are found to be very warm.

On the right side of the temple, there is a door near which a stick is kept. It is said that this stick was used to punish Balaji whenever he did anything wrong. Once such time when he was being punished he got accidentally hit on his chin. Ever since there has been a tradition of applying a little bit of sandalwood on his chin as well.

Just like we do not look back after we light the pyre of a person the flowers which had been donated to Tirupati Balaji are thrown at the back of the temple. These flowers then float down to a place known as Verpedu. This place is 20 Kilometres far from Tirumala. A priest seeing these flowers is considered to be bad omen hence the tradition. Just 23 kilometers far from Tirupati there is a village. The residents of this village follow strict traditions. No one else apart from the residents can enter this village. It is believed that this village provides all the flowers, ghee, butter and milk for the temple.

There is a material known as Kaccha Kapooram that is put on the Tirupati Balaji idol. In reality, if we put this material on any stone or granite then it would break into pieces. However it is used on Balaji idol every day and still, the stone of the idol remains unaffected.

Around the year 1800, this temple was closed for 12 years. During that time a king punished 12 people here. He killed them and hung their bodies in the temple complex. It is said that at that very time Balaji Venakateshwar appeared and gave the king punishment for his actions. If you see the Tirupati Balaji idol you will feel it is located in the center of the Garba Gudi. In reality, though the idol is standing at the right-hand corner of the Garba gudi. There are many lamps lit in front of the idol. They have been burning from thousands of years and till now none of them have been put off.