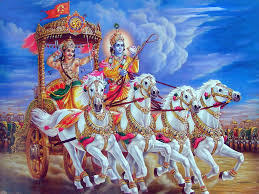 1) Places associated– Aryabhat had calculated that when the war happened the approximate time was 3700 BC. The places mentioned in Mahabharat exist even till today. So while Hastinapur is in Uttar Pradesh, Indraprasth is modern Delhi and Dwarka is on Gujarat coast. Recently the city of Dwarka was discovered beneath the sea. When these ruins were analyzed it was found that they are 5000 to 32000 years old. 2) Ashwatthama presence– There have been multiple incidents of a strange man being spotted near Gujarat. An employee of railways roaming around in the jungles of Navsari said he met a 12 feet tall man. The man had a hurt on his head which was continuously bleeding. Also Prithviraj raso mentions of an incident where Prithviraj meets a man in a jungle who is badly hurt. Since after numerous treatments  the hurt does not heal Prithviraj asks him if he is Aswattthama. The man replies a yes and goes away from there. The soil present in Kurukshetra is still red in colour. It is said that the colour is because of the blood of the soldiers. During excavations many iron weapons were found. Their date of manufacture is approximately 2800 BC.

4) Jarasandh Akhada – In Rajgir near Nalanda is situated the Jarasandh ka Akhada. It is said that this is the exact place where Bhīma and Jarasandh had a fight. Jarasandh was killed by Bhīma here.

The stone in Kurukshetra have nuclear elements in the. Dwarka which was found recently is just as beautiful as it has been described in the Mahabharata.
6) Temple of Duryodhan

In Kerala is located the Malanad temple where Duryodhan is revered even now. Turns out that once Duryodhan was going towards the south. He managed to reach this place and asked a lady for water. Due to his tiredness he did not notice that she was a Shudra. The woman gave him refreshing liquor to drink because he was so tired. When he was about to thank her he noticed that she was from a down caste. But he said that “Mother Hunger and thirst have no caste”. He then gave them 101 yojan land and asked them to make a temple there. Even now the woman’s descendants maintain the temple where Duryodhan, wife Bhanumati, Karna and Gandhari are prayed to. In Mahabharat we find mention of 3 solar eclipses. One was when Pandav were about to leave for the forest and Vidur tells them about it. The second one happened almost two weeks before the war started. Third eclipse happened 36 years after the war and it was seen from Dwarka.
In the year 2003 scientists met in Bangalore to match the position of planets with the dates. After much deliberation they found that the war started on 22 November 3067.

Astronomer Narhari Achar has revealed the other dates of Mahabharat as follows.

Finally another proof of Krishna’s presence is a rock found in Mohenjo daro which has his pictures. In addition many Greek visitors have also mentioned about Krishna in their books. According to Greek details Krishna came 138 years before Alexander which is around 3090 BC. This is also the time when Kalyug started and Dwapar yug ended.

We asked our reader what is their learning from Mahabharata. This is what they said.