The beauty of Meenakshi Amman Temple 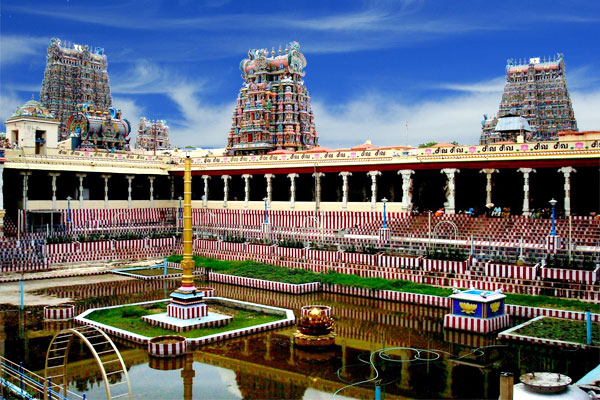 On the banks of the Vaigai river in Madurai is located the Meenakshi Amman temple. This unique and beautiful temple is dedicated to Devi Parvati who is known here as Meenakshi. Her spouse Shiva goes by the name Sundareshwar. It is presumed that the Meenakshi Amman temple was constructed anytime between 1623 and 1655 CE. However many people say that it was constructed by the survivors of Kumari Kandam.

In the 14th century, a Muslim commander Malik Kafur attacked the mandir and robbed it of all its valuables. In the 16th century, Nayak ruler Vishwanath Nayakar rebuilt the temple as per shilp Shasta. The Meenakshi Amman temple has 14 gopurams each averaging at a height of 45-50 meter height. It is estimated that nearly 15000 visitors pay an obeisance at the mandir each day which increases to 25000 on Fridays.

The Meenakshi Amman temple is the only Mandir where Parvati instead of Shiva is the principal deity. As per stories the second Pandya King Malayadwaja Pandya and his wife Kanchanamalai organized a putreshti Yagya. Parvati came out of the Yagya fire however she was blessed with 3 breasts. The king was appalled to see this but a divine voice told them that it will go away once she meets her future husband.

The king named her Tadaatagai and trained her as a warrior. Before here coronation she attacked and subdued Vishnu, Brahma, and all other devas. She then proceeded to Shiva’s home in Kailasa. However the moment she saw Shiva she could not fight and bowed down her head. Her third breast vanished and she understood that she was the incarnation of Parvati. The king then grandly got them married and they both stayed in the Meenakshi Amman temple in Madurai. Even now the wedding ceremony is celebrated each year with much pomp and fanfare. In fact every night Sundareshwar is carried to Meenakshi’s bedroom to consummate the marriage and taken back in the morning. The Meenakshi Amman temple has an emerald-hued black stone image of Devi Meenakshi. The shrine housing Sundareshwar lies in the center of the temple. This signifies that the prominence given to the Goddess originated later. Both the shrines have been given gold-plated tower over sanctum.

There is a sacred temple tank Porthamarai Kulam which is 50 m by 37 m in size. As per legends, this pond tells whether a literary work is a great piece or not. Writers would place their authored work on the water and if it drowns it means it is not good enough. If it floats means you have written a masterpiece. There is a hall of 1000 pillars has two rows of pillars which are carved with images of a mythological creature known as Yali. This hall, however, contains 985 pillars as opposed to 1000 number mentioned in its name. There are nearly 50 priests in the temple who perform all the rituals daily. Having a 6-time puja routine in the temple Goddess Meenakshi is worshiped here before Lord Shiva.

Every year in the month of April the divine marriage of Devi Meenakshi is organized. During the one month, a lot of activities are accomplished here and many rural and urban sects take part in this ritual. The Meenakshi Amman temple of Madurai is a unique mixture of art, architecture, love and faith. It reinforces the belief of true love between couples and is the perfect place to solemnize weddings. A visit to the temple is surely recommended for the lovers of fine art and mythology.