History of the Kashi Vishwanath temple 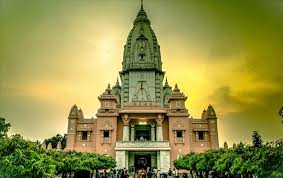 Kashi is a city which is known as Lord Shiva’s earthly abode for many centuries. Also known as Varanasi this city also has the famous Kashi Vishwanath Temple which is one of the 12 Jyotirlingas of Shiva. Some interesting facts of the Kashi Vishwanath temple we are going to cover here.

The temple has been destroyed many times in the course of history. The last structure was destroyed by Aurangzeb who instead constructed a Gyanvapi mosque on its site. In 1780 Rani Ahilyabai Holkar took the responsibility of getting the temple reconstructed on an adjacent location. The two domes of the temple were covered by gold gifted by Maharaja Ranjit Singh. However, the third dome of the Kashi Vishvanath temple is still uncovered. Since 1983 the UP government has been managing the working of the temple. On Shivratri, the King of Kashi is the chief priest and he is the first one to offer prayers to Lord Shiva. It is only after his puja is done that other devotees are allowed to enter the temple.

The story behind the shivling goes that once Brahma and Vishnu had a fight on their supremacy. Seeing this Lord Shiva appeared in the form of a huge pillar of fire which had no end. Both Brahma and Vishnu decided to find the end of the pillar and whoever is able to do that would be declared the winner. Brahma lied and said that he has found the top and there was a flower there. Vishnu accepts defeat and bows down to Brahma. An enraged Shiva then appears and cursed Brahma that he would never be worshiped on the earth. The jyotirlingas are places where Shiva had appeared as a column of light. The temple complex includes a series of smaller shrines which are located near the Ganga River. The linga of the main deity is 60 cm tall and 90 cm in circumference and is housed in a silver altar. On an average day, the Kashi Vishwanath temple receives nearly 3000 visitors. However, on special festivals, this number can rise to 100000.

In Kashi Vishwanath temple the aarti of Lord Shiva holds prime importance. They are held at 5 different times in the day and their details are as follows. People throng from far off to attend these Arti’s. The security of the temple disallows the use of cell phones, camera, and belts with metal buckle, cigarettes, and lighters inside the temple.

Varanasi is one of the holiest cities in India and the Kashi Vishwanath temple adds up to its grandeur. People come to the temple with the belief that Lord Shiva would rid them of all of their problems. It is this popularity of this temple that has led to more temples being made in the same style. However, there is only one Kashi Vishwanath temple and do experience the presence of Lord Shiva’s power there.