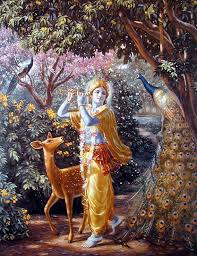 We all know Krishna, don’t we? One of the most loved gods in Hindu religion Krishna knew how to balance politics and relationships. In his life time, he got married 8 times. In this article, we will tell you stories behind Krishna’s marriages.

Rukmini– Rukmini was actually an incarnation of Vishnu’s wife Lakshmi.  She was the daughter of the Vidarbha ruler King Bheeshm.  When she heard about Krishna’s talents and beauty she decided in her heart that she would like to marry him. Krishna had also heard about Rukmini’s qualities and beauty and therefore he was also open to the alliance. But Rukmini’s brother Rukmi fixed her wedding with Shishupal.  With a heavy heart, Rukmini wrote a letter to Krishna for help. After reading the letter Krishna quickly left for Vidarbha. He ran away with Rukmini and got married to her once he reached Dwarka. Jaambvanti-There was a Yadav person named Satrajit. Pleased with his devotion Lord Surya had given him a Mani. Krishna asked him to give this mani to Raja Ugrasen but Satrajit refused. One day Satrajit’s brother took the mani and went to a forest for hunting. In the forest, a lion killed him and took the mani from him. The king of bears Jaambvant killed the lion and took the mani from him. Satrajit accused Krishna of stealing the mani. To prove his innocence Krishna went to the forest and got into a fight with Jaambvant. There was a severe battle between the two and when Jaambvant came to know that Krishna is Vishnu avatar he apologised for his behaviour. Not only did he hand over the mani to Krishna but he also asked Krishna to marry his daughter Jaambvanti.

Satyabhama– When Krishna reached Dwarka with the mani he handed it over to Satrajit. Seeing this Satrajit felt guilty. Out of fear he sought peace with Krishna. He asked him to marry his daughter Satyabhama. Krishna agreed to the alliance willingly and got married to her. Lakshmana– She had heard of Krishna from Narad. Secretly she wanted to marry Krishna and always dreamt of it. She continued praying and doing penance to get that accomplished. Her father also had an idea of her desire. He decided to conduct a Swayamwar. He kept a target which only Krishna could pierce. Still, many brave hearts came to try their luck but they did not succeed. Finally, Krishna came and pierced the target and thus he was married to Lakshmana.

Mitrvinda– The princess of Ujjain Mitrvinda’s Swayamvar was organised by her father. It was decided that she would marry whoever she picks up. Even though Mitrvinda wanted to marry Krishna her brother being Duryodhan’s friend stopped her from doing so. When Krishna came to know of it he abducted her and took her to Dwarka where they both got married.

Bhadra-Krishna had an aunt who lived in Kaikey state. She had a daughter named Bhadra. Both she and her brothers were devoted to the presence of Shri Krishna. They wanted her to marry Krishna only. To fulfil their wish Krishna married to Bhadra.