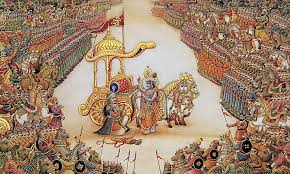 Mahabharata is one of the most intriguing stories of revenge seen in the past history of India. Apart from love, loyalty and friendship it also tells us about betrayal, cheating, and treachery. However, there are a number of inside stories of Mahabharata which not many people know of. Let us read about some of these. 1) Shakuni’s story– Shakuni was the Gandhar prince and brother of Gandhari wife of Dhritarashtra. Legend has it that Gandhari’s future showed that her first husband will die. To combat its effects the king of Gandhara got her married to a goat and got him killed instead. Technically now Gandhari had become a widow. When the alliance with the kuru kingdom came Shakuni was not very happy because Dhritarashtra was blind.

After marriage, Bhishma and Dhritarashtra came to know that Gandhari was a widow and hence imprisoned all the male members of her family. Since they could not kill them they gave them only a handful of grains each day to eat so that they should slowly starve to death. All the members would give that food to Shakuni so that he could survive. When the Gandhara king was about to die he asked Shakuni to make dice out of his bones and use it to ruin the Kauravas. Then Shakuni talked his way out of prison, became close to Duryodhana and started on his evil plan of revenge which included the destruction of Dhritrashtra’s 100 sons.

2) Draupadi’s love– It is said that Draupadi had asked for five qualities in her husband and therefore she got five husbands. However, the truth was that the only person who had these 5 qualities was Karna. Draupadi wanted to marry him but could not because of his caste issues. During the final 14 years of her exile in the jungle, Draupadi wanted to eat a ripe jamun and picked it up from the tree.

However, Krishna told her that this fruit was the food for a sage who is doing penance and he might get angry because you have eaten it. He told her if she wants to save herself she will have to put back the fruit on the tree and that can be done only if she has no secrets to keep. Upon hearing that Draupadi went and told her 5 husbands that she wanted and still longed for Karna. After confessing she went and put the fruit successfully back on the tree. 4) Dronacharya’s birth– One evening Drona’s father Rishi Bhardwaj went to take a bath in the pond. A beautiful apsara was bathing there which amazed him. Unfortunately, he released his semen which he promptly stored in a pot. Also the first test tube baby Dronacharya was born from this encounter.