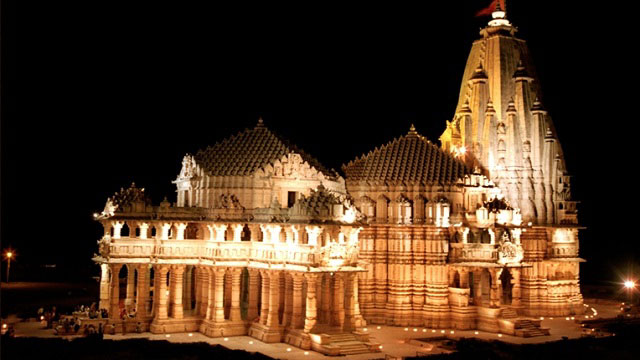 Somnath temple enshrines one of the 12 major jyotirlingas of Lord Shiva present in India. Deo Pattan, Prabhas Pattan, Pattan Somnath (some of the other names of this seaside town in Gujarat, India) has all been erased from public memory. Instead, now this place is known only by the name Somnath all thanks to the popularity of the Temple situated there.

Though there is not much information about when this temple came into being but it is said that it was there even before the start of the Christian era. The second temple was built in the period 480-767 A.D. by the Vallabhi kings. This was further replaced by the Pratihara king Nagabhattta II in 815 A.D. This temple was so highly revered that people came from all parts of the country to offer prayers here.

Nearly 2000 Pundits managed the daily working of this temple and revenue for maintenance came from 10000 villages. There was a bell attached to a gold chain which was rung to announce the start of prayers. The walls of the temple were a reflection of its glorious past. In fact, the walls of the Somnath temple even had the names of the sculptures mentioned. In the year 1025 AD Mahmud of Gazni invaded the city and razed the temple to the ground. This despite the stiff fight put up by the 50000 shiv bhakts in the city. Within a few days, the Somnath Temple was brutally demolished. King Bhīma of Gujarat and King Bhoja of Malwa renovated the temple in red sandstone. However once again in 1300 AD Alaf khan destroyed the temple. This time King Mahipala belonging to the Chudasama dynasty made efforts to renovate it.

After this temple was destroyed and constructed many times in the 14th, 15th and 16th centuries. In fact, it is said that the temple has been reconstructed nearly 17 times since its construction. The Somnath temple was finally ruined again in the year 1706 by Aurangzeb.

After that, there was a lull of more than 200 years. Finally, in the year 1947, Sardar Vallabbhai Patel decided to take the initiative of getting the Somnath temple built again. Thanks to him the temple has now been rebuilt and has gained back its lost glory and charm. This Lord Shiva Jyotirlinga is now visited every year by lakhs of devotees and its architecture is a marvel for many.