The idea of an Independent woman in ancient India 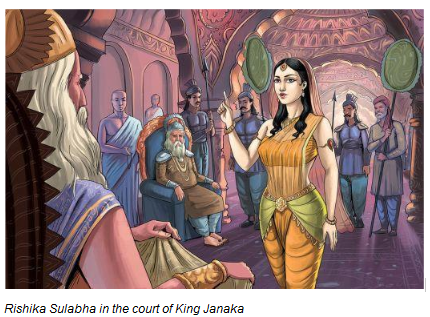 In India women from the medieval ages onwards were mistreated and given to lead a life of shame and dependence. Though the trend has changed now with women becoming independent and able to stand up and fight for their own rights many women, especially in India, have to face the same treatment every day. However, before the medieval period, the stature of women was high and there was the concept of an independent woman leading her life by herself. Though you must have heard of most of them today we are talking about 4 of them and what makes them different.

Sulabha– The account of Sulabha, appears in the Shanti Parva of Mahabharata. She was a learned scholar, Rishika, single woman, and a renunciate. Mahabharata describes her as a woman belonging to the mendicant order . She practiced the duties of Yoga and wandered over the whole Earth. She came to know that Raja Janak had renounced the world and was a propagator of the same.

Sulabha is one of the most interesting and independent women in the Hindu tradition. She was a realized woman, who was a fiercely independent woman and acted out of conviction. Regarding her being a renunciate, she boldly says that since “no husband could be obtained for me that would be fit for me”, she chose to follow the path of renunciation. Thus, following her inner calling, she chose renunciation out of free will. Her account figures in Markandey Puran. She was a Gandharva queen who was married to King Kuvalayaswa. After marriage, she gave birth to a son named Vikrant. From childhood, she used to impart teachings on dispassion, self-control, the elusive nature of the world, and on the true nature of the self to her child. As a result of such teachings being imparted from childhood, Vikrant grew up with extreme dispassion and renounced the life early . The same happened with Madalasa’s second son Subahu and third son Shatrumardana. They also renounced the world and became Sannyasins as soon as they reached adulthood.

When her 4th son Alarka was born the king requested her to give him teachings of Dharma so that he could rule the kingdom after him. She was an independent woman, shared a very loving relationship with her husband, and was an ideal of motherhood. Though Alarka became a king, later after ruling prosperously for many years, renounced the world. This was again a natural outcome of the teachings of his mother. Bhamati, the illustrious wife of the famous Vachaspati Mishra, who lived in the 10th century CE. The tradition has it that Vachaspati Mishra was none other than Sri Sureshwaracharya, the disciple of Adi Shankaracharya, who took rebirth with the sole purpose of writing a commentary on Brahmasutra Bhashya of Adi Shankaracharya. In fact, he had no otherworldly desire except writing this commentary . He had taken a vow quite early in life that he would renounce the world after finishing his commentary.

When Bhamati was married to him she knew he will not be able to take care of her. Still, devotedly she took care of him and all his spoken and unspoken needs. After a few years when Vachaspti got up from his magnum opus he realized that the woman sitting next to him was the one who had taken care of him all these years. He apologized to her for his behavior and also told her that he would now have to take sanyas since his work was over. Bhamati’s life account is unique in many ways. She epitomizes one particular aspect of womanhood, of Stri-dharma, of wifehood: saha-dharma-charini. Hinduism perceived marriage or vivaha as a mutual commitment by the couple to pursue Dharma, Artha, and Kama.

She was born in Karnataka and was a prominent Veerashaiva saint in the 12th century CE. It is believed that her marriage was arranged with a Jain king Kaushika. But it did not go through as he refused to accept some of her conditions. Madhavi instead renounced the world and started wandering from one place to another.

After renouncing the world, she wandered for some time in search of a Guru. She finally reached the Anubhava Mantapam, where other Veerashaiva saints such as Basavanna and Allama Prabhu used to gather. She found her Guru in Allama Prabhu, who further guided her towards self-realization. Madhavi became popularly known as “Akka” or elder sister in recognition of her renunciation, spiritual wisdom, and her role in guiding many others . Even today, she is a household name in Karnataka as “Akkamahadevi.