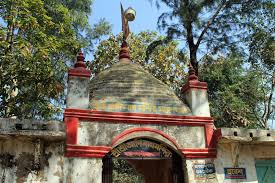 In continuation of our previous article, we are now mentioning some more famous temples in Bangladesh. Since Bangladesh was previously a part of India a lot of these temples are very ancient. Let us read and know more about them. Adinath Temple
Adinath Temple, Maheshkhali– Adinath Temple, is located on the summit of the Mainak Hill on Maheshkhali Island off the coast of Cox’s Bazar. One of the famous temples of Bangladesh, it is dedicated to the Hindu God, Shiva. Another form in which Shiva is worshiped is Adinath. The temple is famous for the annual fair held at the foot of the Mainak Hill in the month of Phalgun as per the Bengali calendar. The fair, which lasts 13 days, draws thousands of Hindus from across Bangladesh.
Dhakeshwari Temple-Ðhakeshshori Jatio Mondir is one of the Hindu temples in Bangladesh. It is state-owned, giving it the distinction of being Bangladesh’s ‘National Temple’. The name “Dhakeshwari” means “Goddess of Dhaka”. Since the destruction of Ramna Kali Mandir in 1971 by the Pakistan Army during the Bangladesh Liberation War, the Dhakeshwari Temple has assumed status as the most important Hindu place of worship in Bangladesh. Joy Kali Temple-The Temple of Joy Kali in Dhaka, Bangladesh, is situated between Thathari Bazar and Wari at 24 Joy Kali Temple Street. Joy Kali Temple is a Hindu temple devoted to Goddess Kali Ma. People of Hindu religion of every age come to this temple in Bangladesh to worship Goddess Kali. The statue of Goddess Kali is of great significance to the Hindus. The visitors and committee members of this temple gather money for occasions, where sweets are later distributed among them which are called ‘Prasad’. The Ramna Kali Mandir– Also known as the Ramna Kalibari was one of the most famous Hindu temples of Bangladesh. It was believed to be over a thousand years old and was situated in Dhaka, on the outskirts of the Ramna Park, now renamed as Suhrawardy Udyan.The temple was bulldozed by the Pakistan Army on 27 March 1971 as it commenced its genocide during the Bangladesh Liberation War.
There are now several temples in the boundary of Ramna Kali Mandir and Ma Anandamoyi Ashram- Ramna Kali Mandir, Ma Durga Mandir, Radha Krishna Mandir are in almost full shape. There are some other on-going Temples to be built e.g. Baba Loknath Temple, Ma Anandamoyi Temple, Shiva Temple, and Temple of Sri Harichad Thakur etc. Dhamrai Jagannath Roth– One of the interesting temples in Bangladesh this is a chariot temple, a Roth. It is dedicated to the Hindu God Jagannath and is located in Dhamrai, Bangladesh. The annual Jagannath Roth Jatra is a famous Hindu festival attracting thousands of people. The Roth Jatra in Dhamrai is one of the most important events for the Hindu community of Bangladesh. Sri Jagannath (Lord of the World) is believed by the Hindus to be an incarnation of Lord Vishnu, one among the Holy Hindu Trinity of Gods (Brahma the creator, Vishnu the preserver, and Shiva the destroyer). Lord Jagannath is also believed to be a deity form of Lord Krishna. Kantanagar Temple– Commonly known as Kantaji Temple or Kantajew Temple at Kantanagar is a late-medieval Hindu temple in Dinajpur. The Kantajew Temple is one of the most magnificent religious temples in Bangladesh belonging to the 18th century. The temple belongs to the popular Hindu Kanta or Krishna and this is most popular with the Radha-Krishna cult in Bengal. This beautiful temple is dedicated to Krishna and his wife Rukmini. Built by Maharaja Pran Nath, its construction started in 1704 CE . It boasts one of the greatest examples of terracotta architecture in Bangladesh and once had nine spires. However all were destroyed in an earthquake that took place in 1897. Boro Kali Bari -This is one of the oldest Hindu temples in Bangladesh. The temple is dedicated to the goddess Kali.The main festival is Kali Puja, which is celebrated every year. The temple is located 10-minute rickshaw pull from the center of the city. Mostly Hindu devotees can visit this temple during the morning to night. However, the daily puja usually starts after sunset. Different types of sweets are available to purchase near the Kali temple.
This concludes our listing of the major temples in Bangladesh. Do let us know what you think about it?