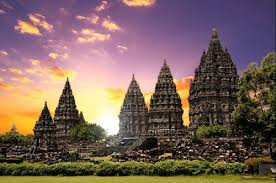 Indonesia is an island country which has Indian origins. That is probably the reason why there are some very ancient Hindu temples in Indonesia about which we are going to tell you in this article. • Tanah Lot Tabanan, West Bali – Tanah Lot is perhaps the most frequently featured temple on Bali’s postcards. This is due to its unique offshore setting and sunset backdrops. The temple is located on the coast of Beraban village in the Tabanan regency. It is simply among Bali’s not-to-be-missed highlights on tours to Bali’s west but is also an easy standalone trip – only a 45-minute drive from Kuta. The onshore site consists of smaller onshore village temples alongside visitors’ leisure facilities that comprise restaurants, shops and a cultural park presenting regular dance performances. The best time to visit is during the holy day of Kuningan when pilgrimages usually take place.

• Uluwatu Temple- Uluwatu is one among  picture postcard temples in Indonesia. The temple is also known among surfers as an exotic surf spot. Located on a southwest cliff top approximately 70 meters above the crashing waves.  Pura Luhur Uluwatu, as it is referred to by locals, shares the splendid sunset backdrops of Tanah Lot. But at a higher altitude, providing broader ocean and horizon views.

Cultural performances such as the Ramayana ballet or Kecak dance, take place in a specially designated amphitheater. Located at the temple’s south, it takes place during the golden sunset hours, perfect for memorable pictures. Definitely one of the top places on the island to go to for scenic and sunset moments. Also for ancient architecture and sculptures, and there’s a dense monkey forest nearby inhabited by gray long-tailed macaques. Uluwatu Temple celebrates its biannual piodalan temple anniversary every ‘Kliwon Medangsya’ Tuesday on the Balinese 210-day pawukon calendar. • Ulun Danu Beratan temple-  Literally ‘the source temple of Lake Beratan’, is easily one of the most iconic temples in Indonesia. It shares the scenic qualities with the seaside temples of Uluwatu and Tanah Lot. The smooth reflective surface of the lake surrounding most of the temple’s base creates a unique floating impression.  While the mountain range of the Bedugul region encircling the lake provides the temple with a scenic backdrop. The temple was built in the 17th century in the worship of the main Hindu trinity, Brahma-Vishnu-Shiva.  Also for the lake goddess, Devi Danu. The sight and cool atmosphere of the Bali uplands have made the this temple a favorite sightseeing and recreational spot. These are some of the interesting Temples in Indonesia. Next time you go there do plan a visit to these exotic locations too.