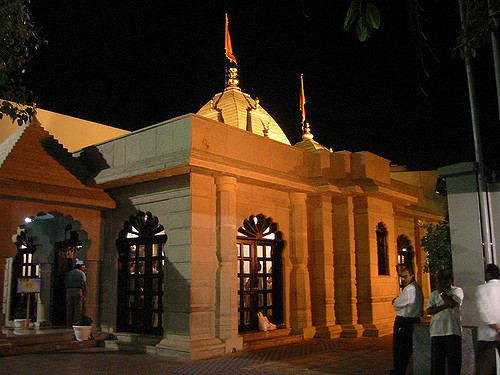 UAE has a considerable population of Hindus. However, there are not many temples dedicated to this religion in this particular region .While Dubai boasts of having a Shiva and Krishna temple there are not many other temples around. Abu Dhabi is soon to get its first Hindu temple. Apart from that this region has the below-mentioned temples some of which are pretty ancient.
1) Yemen -More than half a dozen temples were built in Aden, Yemen, in the 19th century. The Shree Trikamraiji-Haveli Temple was built in 1862, followed by the ‘Sheikh Othman’ Hanumanji Temple, Shree Ram Chander Ji Temple, Shree Hingraj Mataji Mandir and Shree Shankar Hanuman Temple. There is also a Jain temple and a Sikh Gurudwara in Aden. 2) Iran– You will find a Hindu temple constructed in the Bandar Abbas area. This temple had been constructed in the year 1310 AH during the rule of Mohammad Hassan Khan Sa’ad-ol-Molk. In the temple, there is a square shaped room in the center of which is a jagged shaped dome. The architecture of this temple is quite similar to other Hindu temples in India. Apart from this, a Gurudwara was built by Sikh traders in Zahedan in 1927. 3) Oman– There is a large Hindu population in Oman. There are two temples to cater to the devotions of these people. As of now, there are two temples in the capital city of Muscat. One is a Krishna temple in Darsait and another Shiva temple in Muttrah. Shri Krishna Temple is situated in Darsait near Church and is about 28-30kms from Seeb Airport. This temple was constructed by Merchant Community from Gujarat settled in Muscat, in the year 1987. It was subsequently extensively renovated in the year 2013.  All the facilities for devotees to worship along with a Multi- Purpose Hall were introduced . This hall has a capacity of 500-700 worshipers to take part in any function organized by the Management.
Further more Krishna Temple complex, Darsait has following temples on the premises:
1. Shri Krishna Temple
2. Shri Ganeshji Temple
3. Shri Mataji Temple
The Temple is open throughout the year from morning 5:30am to 11:30am and evening 5:00pm to 9:30pm.

4)Bahrain– Bahrain’s capital city has two hindu temples. One is an ISKCON temple situated in Kuwait Avenue. Other is a Guruvayurappan temple in Adliya. The ISKCON temple is a good temple complex housing idols of Krishna complete with a meditation and Bhajan Hall. On weekends and special occasions, it takes a long time to get darshan in this Hindu temple.