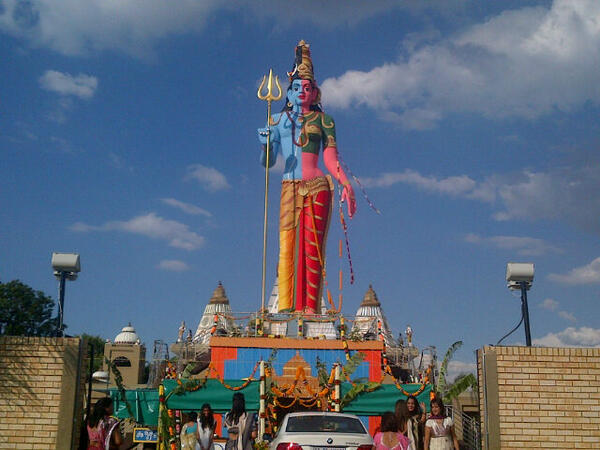 In continuation with providing you information on temples based out of India, we bring to you a list of the famous temples in Africa. Hopefully, this list will provide you an idea of the extensive nature of Hindu religion all over the world.
• Shri Swami Narayan Mandir, Nairobi, Kenya– The Mandir encompasses The Wooden Mandir and the Heritage Exhibition. It is open to visitors from 8:00 am – 12:00 noon & 4:00 pm – 8:00 pm daily throughout the year. As the name suggests it is dedicated to Lord Vishnu and comprises of a beautiful architecture which is worth a look. Apart from idols of Lakshmi Narayan, there are also idols of Ganesh, Hanuman, and Krishna –Radha.
• Melrose temple -The Johannesburg Melrose Shree Siva Subramanian Temple (Melrose Temple) was founded in 1870 by indentured Tamil laborers working in the Melrose Laundry. One of the very famous temples in Africa it initially started out as a tin shack was extensively renovated in 1996 and then again in 2011.

The Melrose Temple is now a beacon of Murugan worship in South Africa and the world and has a congregation in excess of 20,000 devotees. The Melrose Temple is dedicated to the worship of Lord Muruga, his consorts, Valli and Deyvani, his Parents Lord Siva and Mother Parvathi and his Brother, Lord Vinayager. • Balaji temple – During the year 2000, few friends toyed with the idea of building a Balaji Temple so that the community can have a dedicated place of worship with the traditional Indian Architecture. Immediately they formed a trust by the name “Botswana Hindu Charities Trust” (BHCT) and applied for allocation of land. On 16th Sep 2007, with the performance of the Kumbhabhishekam (Sanctification of the deities) the Dream came to a Reality. A dazzling Temple with its entire splendor is there for everybody’s use in this country and beyond.

The temple has been constructed using the classical South Indian architectural style. Lord Balaji is gracing the devotees with his consorts Sridevi and Bhudevi as the presiding deity. The main mandir has the Sanctum-Sanctoriums for Lord Ayyappa, Lord Muruga with his consorts Deivanai and Valli. The Sanctum-Sanctoriums for Lord Ganesh, Lord Anjaneya, Lord Siva, Matha Vaishnodevi, and Navagrahas are situated on the outside.
• Omkar Mandir Harare-The pioneers of the Hindu community of Harare were very small in number and financially not well established. However they made up for this with immense courage and astute foresight. The inauguration stone was laid by the Late Mr. Lalji Dayalji Vashi on 14 February 1929.The decision to have an “OMKAR” as a centerpiece was remarkably bold and judicious. The temple became a place of prayer for all sects of Hinduism, uniting the entire community. As time passed, the community grew and the majority began to settle in Ridgeview.

The need arose for a larger temple at the Anson Road Cultural Centre. With the generous support of the communities approached the temple was finally completed in 1992. The “OMKAR” remained as the centerpiece. Priest’s quarters were added and the eventual cost was double the initial estimate! If I am informed correctly, these temples in Africa are the only “OMKAR” mandirs in the world! • Sri-Sri Radha-Shyamasundara Mandir – The temple is located in the center of Lagos City, Nigeria close to the International Airport. The area has a mixed community of Indians and local Africans. The area is also known for being safer than other parts of Lagos. Krishna consciousness first came to Nigeria in 1979, brought by Brahmananda Dasa and the late ISKCON guru Bhakti Tirtha Swami.

In fact, when he could find no place to stay in Lagos, his character and devotion so touched the heart of one Indian man, that he offered the Swami two rooms in his hospital. Thus, ISKCON Lagos began. Today, in Nigeria alone, there are ten ISKCON temples across the country making it one of the famous temples in Africa. Meanwhile, in Lagos, devotees hold weekly Sunday Feast programs, 24 Hour Kirtans once a month, Ratha-Yatra once a year and occasional college outreach and Food for Life efforts. There is also a major focus on spiritual education. • Shiva temple Benoni – An intriguing creation amongst the famous temples in Africa it has the highest Shiva-Shakti statue in the world, towering 20 meters above the ground. Nine artisans from India spent 10 months building and putting the finer detail on the steel statue at Actonville in Benoni which features Lord Shiva on one-half and Mother Shakti on the other.
• Hindu temple complex at Springfield Park– Where the affluent Hindus arrange their weddings. This big temple has a modern monochrome interior with cleverly hidden spotlights illuminating “trendy” idols. The temple was built in 1901 by the Hindus living there. All the administrative work and services of the temple are carried out by Vaishnavas and family members. The Sandton Hindu Samaj hosts many religious festivals at the Mandir and dates of upcoming events can be found here. The samaj has successfully started a Gujarati School for the youth. The hall can also be rented from the samaj for havan’s, weddings and other religious functions.

• Mount Edgecombe Ganesh Temple– The Mount Edgecombe Ganesh Temple is a provincial heritage site in Inanda in South Africa. In 1977, it was described in the Government Gazette as Heavily modulated perimeter wall. Entrance portal surmounted by SIKHALA tower. Cella on axis, square…This Hindu temple is the first building by the well-known architect and builder, Kristappa Reddy. The building was erected in 1899 and forms a unique part of South Africa’s cultural and architectural heritage.

It was followed by observing the Maha Kumba Abishegam, which marked the 125th year since the temple was established in 1889. The temple has been popular among the South African Indians for the Annual Thaipusam Kavady Festival.

These beautiful temples in Africa are keeping the spirit of Hinduism alive in that country.