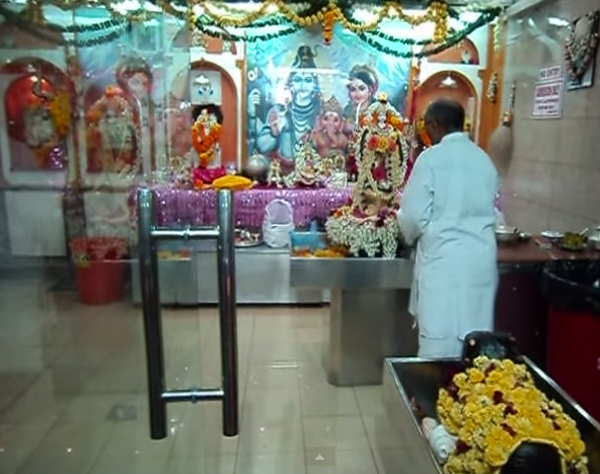 In spite of being occupied by a huge population of Indians the UAE region has only one Hindu temple.  This temple is situated in the city of Dubai. This Hindu temple in Dubai is locally also known as the Shiva and Krishna temple. It is aimed at serving the large Indian community present in the UAE region.  In future there are plans to construct another temple which would be located in Abu Dhabi.

The temple which comprises of a Shiva and Krishna temple is located just west of the Dubai creek in the area of Bur Dubai. It is run in association with the Indian consulate based in Dubai. The hindu temple in Dubai is also famous for organizing wedding ceremonies for couples . However, the registration of such marriages is not possible in UAE.

Initially, the first floor of the Shiva temple housed a Gurudwara too . The same has been shifted to a new location in Jebel Ali. In the year 1958, Sheikh Rashid bin Saeed al Maktoum gave the permission for this temple to be built on the lanes of Bur Dubai. The temple opens from 06:00 am in the morning to 1 pm in the afternoon. In the evening it is again opened for darshan at 4:30 pm and stays open till 10:00 pm.

The most interesting part is that there is mosque just right next to the mandir an amalgamation of mixed relations. The entrance of the temple has a number of shops lined up which offer all the offerings that are needed for doing puja inside. Devotees throng the temple on every festive occasion and offer Milk, coconut, fruits, flowers and sweets to the God’s. Even though the temple is dedicated to Lord Shiv and Krishna there are paintings of other gods too. You can also see paintings of Ganesh, Goddess Durga, Goddess Lakshmi, and Sai Baba. Spend some time and  pay obeisance to them too. The weekends and holidays are days when there is a huge crowd in the Temple. If you intend to visit the temple you might have to wait in a long queue.  Only then will you be able to get darshan.
The most interesting part of this temple is that in spite of it being housed right next to a mosque there have never been reports of any untoward incidents or any religious disharmony happening here. When Indian Prime Minister Narendra Modi paid a visit to UAE in August 2015 he witnessed the announcement of land for a new temple in the city of Abu Dhabi.