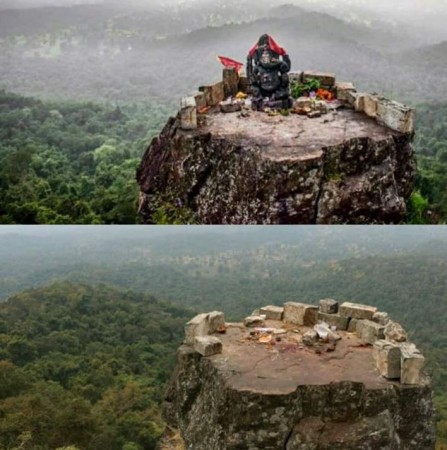 Dholkal Ganesh is a 6 foot idol of Lord Ganesha. It is situated at the top of Dholkal mountain in Chattisgarh. It was discovered by a local journalist in 2012 and since then it has become very popular. Dholkar mountain is in the Bastar area which is a high activity area for maoist terrorists.

The idol located at 13000 feet is believed to be established by Nagvanshi dynasty in 9th to 11th century AD. The place was completely isolated till 2012 which is a pretty remarkable thing in India. An English geologist had mapped the area in 1930s and had noticed the Dholkal peak but had not noticed the Ganesha idol.

Destruction by Maoists and restoration

Maoists destroyed the statue by pushing it down from the hill in January 2017. However the government and concerned citizens were quick to restore it to its full glory within a week.

Archaeologist Padmashri Arun Kumar Sharma lead the restoration work and completed it with lightning speed. Administration has also arranged for a permanent security at the site.

The good news is that the idol has become a major tourist attraction and thousands of people now intent to visit it. This is likely going to be a major setback to the Maoist terrorists.

Nagvanshi dynasty was active till 14th century and believed to worship snakes. They ruled the modern day Chattisgarh area. The copper plates of this period relate to the Nagas being defeated by the Guptas and subsequently being married into them. One example is that of King Chandragupta II, who married Queen Kuberanaga.